"I got the phone call to ask me to join this as I came out my dad’s first bone cancer scan, so it wasn’t really a difficult decision as he took me across to the car and said: ‘so are you going to do it?’"

Strictly Beatson will be held on Saturday 8th October at DoubleTree by Hilton Glasgow Central.

Strictly Beatson will be held on Saturday 8th October at DoubleTree by Hilton Glasgow Central.

"I got the phone call to ask me to join this as I came out my dad’s first bone cancer scan, so it wasn’t really a difficult decision as he took me across to the car and said: ‘so are you going to do it?’"

Beatson Cancer Charity’s hosting a Strictly Come Dancing inspired event this year in a bid to raise additional funds for cancer patients across Glasgow and the west.

Strictly Beatson will be held on Saturday 8th October at DoubleTree by Hilton Glasgow Central consisting of five teams - each with personal connections to the charity.

There will be two professional dancers assigned to groups of six novices and each group will dance as a formation. The groups have picked a movie to base their dance on and they’ve each been in training since May preparing for the event.

The teams taking part include Team Eilidh from Lanarkshire, who are supporting the charity in memory of 22-year-old Eilidh McHugh who sadly died in 2017 after being diagnosed with a rare type of cancer. They have raised over £400,000 for the charity since Eilidh passed away. 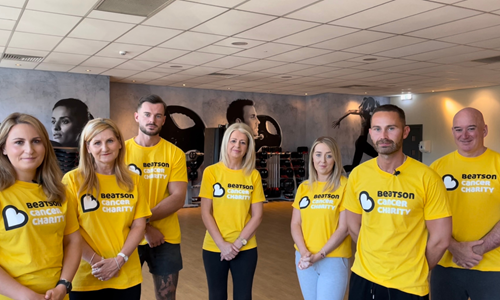 Elaine McHugh, Eilidh’s mum, said: “When we lost Eilidh, as a family we made a positive decision that we would make a difference in her name in the world – and that’s what we’ve been doing for five years.

“Eilidh loved to dance and it’s not easy for us to dance because that’s carefree and fun and life is difficult some days, but it really strengthens our soul to do this and we’re forever grateful for the team coming together and we’ll dance on the night in her name.

“It’s not all about raising money for us, it’s about honouring Eilidh.

“Each year we do something for her birthday, we usually have a ladies lunch but this year we’re not doing that – we're doing the strictly event for Eilidh’s 28th birthday because it’s really important for us to mark that occasion even although she’s forever 22.

“Each year we do something in her name, so this is what we’re doing this time and I think she’d be proud of us.”

The team are hosting different fundraising activities to raise money for Beatson Cancer Charity through the event – including school danceathons, fun days at David Lloyd in Hamilton and Silverbirch Garden Centre are also raffling £1000 of gift vouchers courtesy of team member Andy Wood, who is one of the directors.

Other competitors include the team at Beat 6, made up of members from the Six by Nico group. Nico opened Beat 6 to give back to the charity after his wife Valentina was diagnosed with cancer when she was 25-years old and was treated at the Beatson. 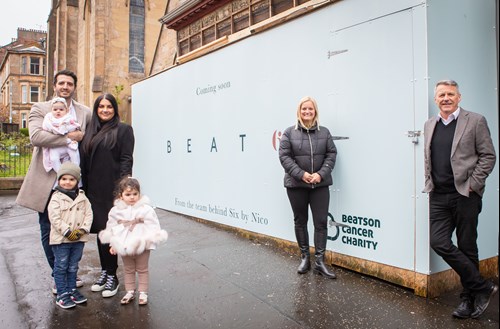 Nico Simeone, owner of the restaurant group, said: “It’s a charity that’s very close to us all, obviously we have Beat 6 where all the profits go to Beatson Cancer Charity, it’s just something that we are passionate about.

Morgan Pope, brand director at Six by Nico, said: “We decided to take part because we opened Beat 6 and fundraising for Beatson Cancer Charity is at the core of what we do at the restaurant.

“Beatson Cancer Charity’s close to everyone at the company but mostly Nico, and obviously he’s a great dancer so we thought ‘let’s show everyone his two-step!’.

“We’re looking forward to being able to show everyone a different side to the business. Obviously, we’re quite busy all the time and very much in hospitality it’s full steam ahead, so it’s about taking a break from that and having a bit of fun.”

Glasgow-based cladding firm Curtis Moore Ltd are also taking part in the event following a personal link to the Beatson. 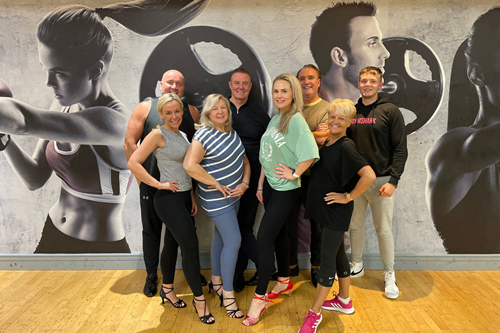 Yvonne Devlin, Group Financial Director at Curtis Moore, said: “It’s for a good cause, we’ve all known someone or had some experience to do with cancer and the Beatson is an amazing place to be treated.

“I’ve experienced it myself and that was the reason for trying to get a group together to raise more funds for the charity.

“When we come in at this time it can be quite tiring after a stressful day at work, but we all go away buzzing, the adrenaline’s going, we’ve had such a laugh, it’s great fun. We feel good.”

The chief executive of AutoRek in Glasgow is also in training for the event along with friends and family.

Gordon McHarg, who also co-founded the company, said: “It’s been a charity that AutoRek as a company have been supporting for a number of years and I guess when Beatson Cancer Charity launched the Strictly event, I was hoping we could put in a company team - but my wife got in front of us and we have a group of our friends and Diane and Warren teaching us.

Sheila McHarg, Gordon’s wife, said: “It touches everybody. There’s probably not one member of any team that’s taking part that hasn’t had somebody or several members of their family who’ve benefited from treatment and services provided by the Beatson. It’s just so important.

“We also want to give hope to the future, the generations following us – our children, our children’s children – we want research, we want to just beat this horrible disease.”

Family and friends from the Malcolm Group are also taking part. The company host a bi-annual ball supporting our charity, which raised £190,000 for Beatson Cancer Charity last year.

John Cleat from the group said: “I think everybody knows somebody who’s had cancer so I’m sure we’ve all experienced that in some shape or form, I think it’s just nice to do something completely different to your normal daily routine and put yourself out there.”

Scott Campbell, who’s also representing Team Malcolm, said: “I got the phone call to ask me to come along and join this as I came out my dad’s first bone cancer scan, so it wasn’t really a difficult decision as he took me across to the car and said: ‘so are you going to do it?’”

Judges for Strictly Beatson include Donnie Burns MBE, who was born in Hamilton and now lives in California.

He has previously hosted Dancing with the Stars in America and was heavily involved with Strictly Come Dancing in the planning stages of the show.

He’ll be joined by his wife Heidi Groskreutz, who is best known for reaching the finals of the second season of ‘So You Think You Can Dance’ in America. The pair will also be performing a special routine on the night for guests.

Also judging alongside the couple will be professional ballroom dancer Barbara McColl, and broadcaster Bryan Burnett will be hosting.

Morag Cunningham, fundraising director at Beatson Cancer Charity, said: “We are so grateful to all the teams for volunteering to take part.

“They all lead very busy lives and it’s amazing to see the dedication from them – they're all competitive and are putting 100% effort in.

“We have been wanting to stage this event for a while and believe it will be a great success.

“We have seen all the teams in rehearsals and the quality of dancing on the night will be something quite special.”