"It is great to see so many families get involved - it shows the level of generosity from the people of Glasgow."

The festive run took place on a new 5K route starting and finishing on Glasgow Green.

The festive run took place on a new 5K route starting and finishing on Glasgow Green.

"It is great to see so many families get involved - it shows the level of generosity from the people of Glasgow."

The festive family fun run took place on Sunday 11th December on a new 5K route starting and finishing on Glasgow Green. Chilly weather failed to affect the festivities as runners of all ages and abilities limbered up to tackle the course. Lots of dogs also brought their owners along to take part too!

PICTURED: Thousands took part in the 5K run on Sunday 6-year old Cole Park of Kirkintilloch completed the run in his wheelchair pushed by a team of around 30 supporters including his mum, Michelle.

Cole has been receiving treatment at the Beatson West of Scotland Cancer Centre since March this year for an aggressive brain tumour, and was guest of honour at the event. Along with his family and friends, Cole was raising money for the Beatson Cancer Charity and managed to walk over the finish line.

After completing the route and collecting his medal, he declared the event "fun"!

PICTURED: Cole and his family Bailie Paul McCabe of Glasgow City Council started the run which snaked around the park, through the Gorbals and along the riverside in the winter sun.

He said: "It's wonderful to see the Santa Dash return in such style and with huge support. Everyone loves the Santa Dash, it is held in great affection by runners and spectators alike and there was huge disappointment when it couldn't go ahead in person during the pandemic.

"Today's event was really uplifting. It put a huge smile on everyone's face. We had a fantastic turn out and the wintry weather made it feel even more festive. Well done to everyone who took part."

PICTURED: Some runners took their costumes to the next level 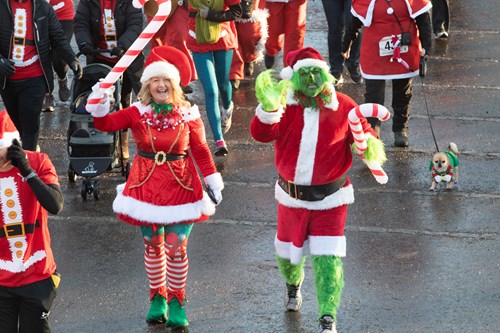 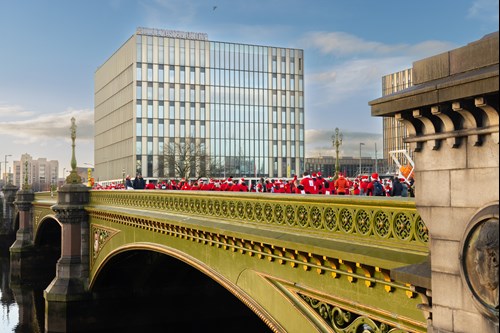 The Santa Dash was organised by the city council in partnership with Beatson Cancer Charity whose mascot Bella the Bee greeted the crowds. Any profits from the event (from registration fees) will be split between the Beatson Cancer Charity and the Lord Provost's Children's Fund. Medals were presented to everyone who crossed the finish line at the landmark 2014 Commonwealth Games sculpture.

PICTURED: A sea of Santas crossed the finish line 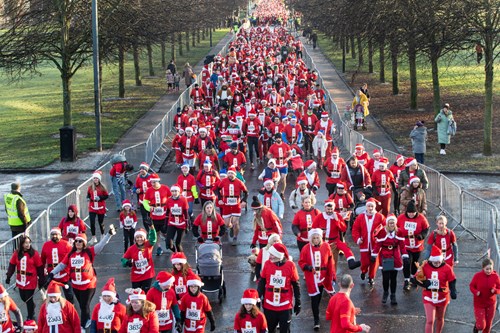 Martin Cawley CEO of Beatson Cancer Charity expressed his delight with the success of the event.

He said: "The Santa dash is such a wonderful event and takes place at a very special time of the year for us all. We are delighted to work alongside our colleagues in Glasgow City Council to bring the event back after a couple of years relying on virtual support. It is great to see so many families get involved.  It shows the level of generosity from the people of Glasgow.  The proceeds from this year's Santa Dash will help Beatson Cancer Charity continue to deliver invaluable supports to people with cancer in Glasgow and across the west. Quite simply, we couldn't do the work we do without the support of so many others."

Thanks to television presenter, Bryan Burnett, who compered the event, Irvin Stringfellow of the Showman's Guild who provided the children's rides, FirstBus who provided free transport for participants and Steve McIntosh of  HAWQ Drone Operations who provided amazing footage, as well as all the volunteers who helped make it a massive success!