"We need to come together to help raise as much money as possible for research, for treatments and to allow all the wonderful teams at The Beatson to continue the fantastic work they do on a daily basis"

The event usually attracts around 2,000 supporters each year.

The event usually attracts around 2,000 supporters each year.

"We need to come together to help raise as much money as possible for research, for treatments and to allow all the wonderful teams at The Beatson to continue the fantastic work they do on a daily basis"

Cancer patients and families across the country are getting ready to turn the west end of Glasgow yellow for Beatson Cancer Charity.

The charity’s annual Off the Beatson Track 10k walking event will be taking place on Sunday 28th August. The event usually attracts around 2,000 supporters each year.

It’s been a virtual walk for the last two years but is back as a live event on Sunday 28th August, which STV’s Laura Boyd and BBC’s David Farrell will be hosting. The event is also proudly supported by our event media partner Go Radio.

Click here to Register for Off the Beatson Track

51-year old cancer patient Mairi O’Brien will be one of those taking part in the event at the end of this month. 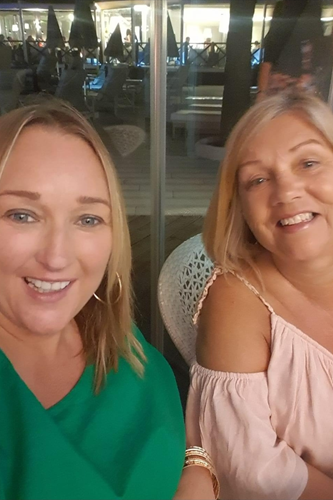 Mairi, from Royston in Glasgow, and her friend Anne Cairns, 62, from Summerston in Glasgow, will be walking to show their support following the treatment and care Mairi has received.

Mairi said: “We are taking part in the event this year to raise vital funds for Beatson Cancer Charity so they can continue to provide support and treatment to people diagnosed with cancer.

“Beatson Cancer Charity is important to me as I was diagnosed with breast cancer seven years ago and I attended the hospital for my treatment.

“Seven years on and I have returned as I was diagnosed with secondary breast cancer in my lung and spine in 2020. I attend the Beatson every month for treatment and can't thank them enough for the support given to both me and my family.”

46-year old Sharon Retson from Stirling who lives in Larbert has also signed up to the event, after ringing the bell to signal the end of her cancer treatment at The Lanarkshire Beatson in Monklands just last month. She’s taking part with seven members of her family and friends who are also from Stirling. 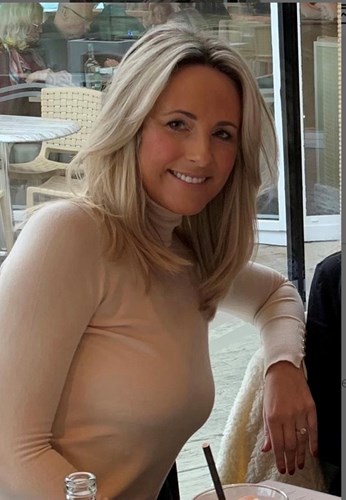 Sharon said: I’m taking part in Off the Beatson Track this year as it’s close to my heart after being diagnosed with breast cancer in March 2022. I attended the Beatson daily for two weeks for radiotherapy.

“It’s important to me as my experience with the Beatson was a good one. The staff are amazing and helped me through a difficult time and made it a pleasure to attend every day without feeling fearful. The surroundings are beautiful at Monklands and at times you thought you were at a spa retreat.

“I want this to continue for others that may need the Beatson in the future as I think it’s a wonderful thing they do.”

The team at Gartnavel Hospital’s Capital Planning department are also taking part. Jacqueline Steele from Kilbirnie in North Ayrshire and her friends from East and South Ayrshire, Hamilton and Glasgow will be taking on the 10k challenge. Some of Jacqueline's family and friends will also be taking part with the team. 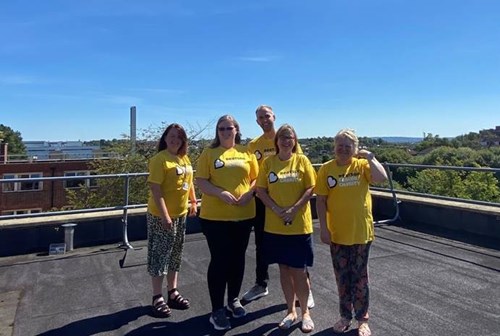 Jacqueline said: “My dad lost his battle with cancer in 2018 and every year, in his memory, I try to raise funds for a cancer charity.

“Sadly since his passing I have also lost an aunt, my friend has lost both her parents, another her dad, recently a dear friend, who fought cancer for over 15 years, lost her battle too and since signing up we have received the heart breaking news that loved one has had their diagnosis confirmed.

“Each and every one of the people mentioned have been to Beatson Cancer Charity or The Beatson for support, treatment or care during their cancer journey.  I’m taking part to honour their continued strength, the memory of those we have lost and the challenges they have all faced or are currently facing.

“I attended the Beatson many times with my Dad during his treatment.  He was very appreciative of the service both the charity and centre provided during his time there.

“He was partial to a cake or two and often raved about the wonderful Beatson Café. Taking part in Off the Beatson Track was the very least I could do give something back for all the people Beatson Cancer Charity and The Beatson have helped and continue to support.”

42-year old John Doogan from Milton of Campsie in East Dunbartonshire will be taking part in the event with his family. 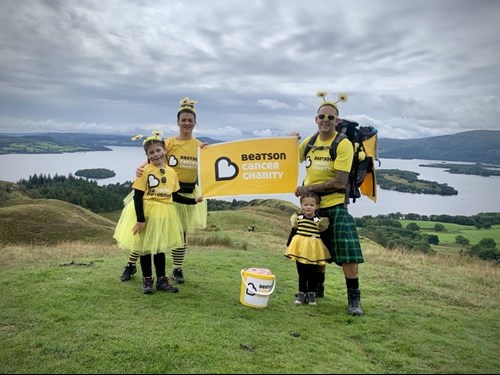 John said: “It devastated me to find out in early 2017 that my dad was diagnosed with bladder, throat and bowel cancer. Our lives and his were about to dramatically change when he became another patient of The Beatson, continuously fighting his own personal battle on a daily basis while he underwent an intensive course of radiation and other procedures, which took months to fully recover from. Followed up with years of appointments and treatments never knowing if the cancer will return.

“After sitting in the hospital with my dad, it hit me that even if you are not the one undergoing treatment - you, your friends and your family are all affected by cancer in some way. We need to come together to help raise as much money as possible for research, for treatments and to allow all the wonderful teams at The Beatson to continue the fantastic work they do on a daily basis, not only supporting patients but also the family members affected.”

41-year old Alison Monroe and her family from Kirkintilloch and Lenzie in East Dunbartonshire will be joining the crowds on the day, after her husband, Stuart, 49, was diagnosed with cancer 12 years ago. 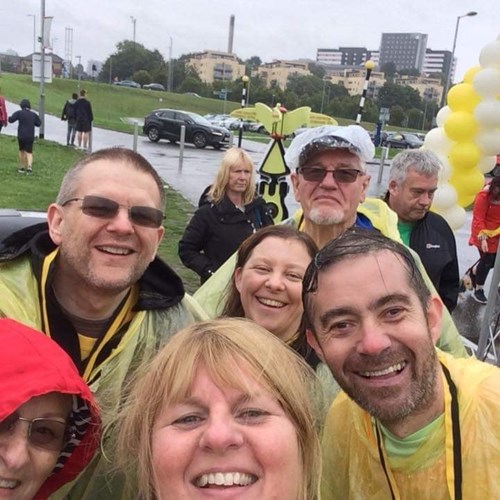 “My husband Stuart is a patient of the Beatson and has been for the last 12 years and we have had other family members affected by cancer.

“The Beatson and Beatson Cancer Charity are so important to us as it saved my husband's life back in 2010. The charity and hospital played a big part in getting him through the treatment medically & emotionally.

“Due to this, I wanted to give something back to the charity as a way of saying thank you for getting Stuart through his treatment, so I am now a volunteer for the Beatson Cancer Charity, although anything I do with them will never be a big enough thank you for what was done for Stuart in 2010. Stuart is now in remission and still checked on a yearly basis.

“Stuart always spoke very highly about the great nurses he had on the wards, and the volunteers/ staff in the Wellbeing Centre.

“I have seen firsthand what the Beatson and Beatson Cancer Charity do for their patients and how valuable every penny is for them. I am very proud to volunteer for a great charity and aim to raise as much in funds and support them as much as I possibly can.”

A family from Barrhead in East Renfrewshire will also be taking part in the west end event. 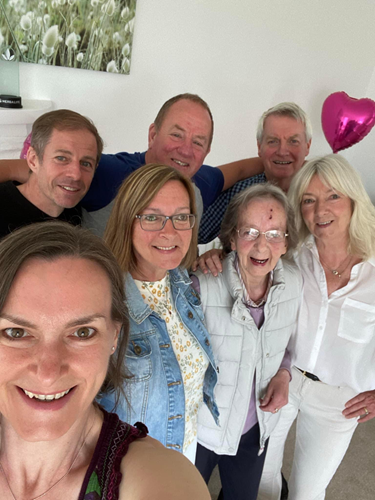 50-year old Carly MacGregor Grant and her husband 51-year old Iain Grant will be taking on the challenge with Carly's sister Fiona Christie and her husband David Christie who are also from Barrhead, and Carly’s other sister Helen Connor who is from Crawford near Biggar in South Lanarkshire.

Carly said: “Our dad died of cancer 32 years ago, and when we realised Off the Beatson Track was going to be on the eve of what would have been his 90th birthday this year, we thought it would be a fitting way to celebrate this special anniversary and raise some money for a great cause in his memory.

“Our dad was a medical man, an educator, a researcher, and an innovator. He loved new technology and one of my strongest memories of him was his appearance on the TV program ‘Tomorrow’s World’ back in the early 80s.

“As well as the many amazing wellbeing services Beatson Cancer Charity provide to patients, they also fund specialist staff and support cutting-edge cancer research and education, which Dad would have loved.”

Linda Swift from Inverkip and her daughter Suzy Dow from Broughty Ferry will be joining the other teams in memory of Linda’s dad.

Linda said: “My dad, Bobby Johnstone, is currently receiving radiotherapy treatment for prostate cancer at the Beatson. At 86-years old, he is one of the oldest patients referred for radiotherapy and we are so thankful for this. Dad is a fighter and always busy, he doesn't act or look like a typical 86-year old and we are very proud of his positive attitude. This treatment will hopefully let him see 100 as he's healthy in every other way.

“My mum, Jean Johnstone, is a survivor of breast cancer and also received radiotherapy treatment from the Beatson. Our family have so much to be grateful for and to thank Beatson Cancer Charity for on their behalf. This is why we want to walk and give a little something back from us to this amazing charity.

“Through all our fantastic sponsors we can hopefully make a little difference. The work the Beatson offers and provides to all those experiencing cancer is excellent, not just to the cancer patients themselves but to their family members too.”

“We’re so grateful to everyone who took part in the virtual walks over the last two years, but we can’t wait to see a sea of yellow take to the streets of Glasgow once again.

“Every single person who signs up is allowing us to support more cancer patients and their families over the years to come, and we cannot thank you enough for that.”

For more information or to sign up to the event visit our OTBT webpage here.