Over £53,000 raised by supporters taking part in Off the Beatson Track

Around 1,500 people were involved in the walk, which started at the Riverside Museum in Glasgow.

Around 1,500 people were involved in the walk, which started at the Riverside Museum in Glasgow.

More than £53,000 has been raised so far by walkers who took part in Beatson Cancer Charity’s ninth annual Off the Beatson Track 10k walking event on Sunday 28th August.

Around 1,500 people were involved in the walk, which started at the Riverside Museum in Glasgow at 11am.

Many supporters set up Just Giving pages before the event to raise funds for the charity, many of which are still receiving donations.

Hundreds of walkers brought their four-legged friends to join them on the route, who made use of the ‘Beatson Doggo Station’, which provided them with water and treats before the walk began.

PICTURED: Walkers get warmed up to a Zumba Session by the Glasgow Zumba Sisters 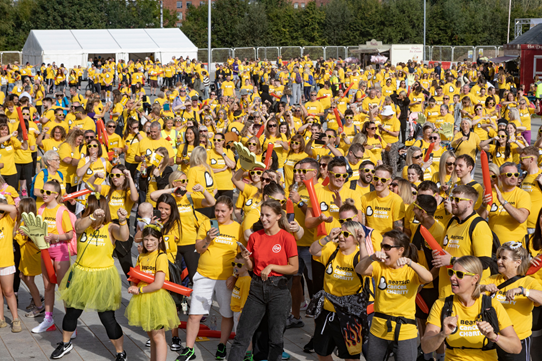 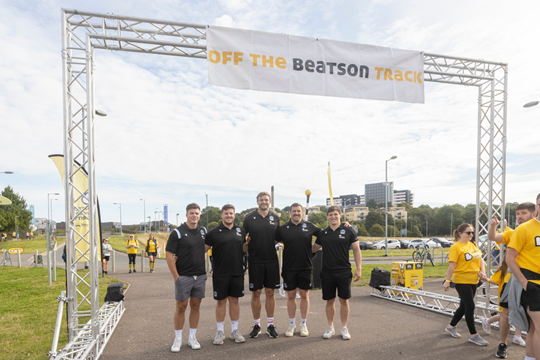 Over 12,000 people have previously participated in the event, raising £750,000 over the years to help support thousands of current and former Beatson patients and their families.

BBC’s David Farrell and STV’s Laura Boyd were on the main stage and interviewed several participants to find out why they were taking part, before they introduced supporters to Glasgow’s Zumba Sisters who hosted a Zumba session to get everyone warmed up. 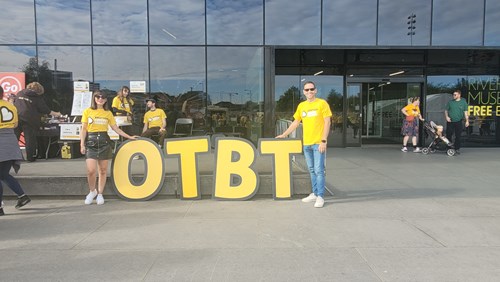 8-year old Lexie Allen, who was taking part with the rest of the Allen family from Tillicoultry, pushed the plunger to signal the start of the event. Tam the Piper led the first wave of walkers off.

Walkers left the Riverside Museum in waves and made their way to the Beatson West of Scotland Cancer Centre, along the River Kelvin, past Kelvingrove Art Gallery and Museum and back to the Riverside Museum to finish. Participants started arriving back at the finish line from 1pm. 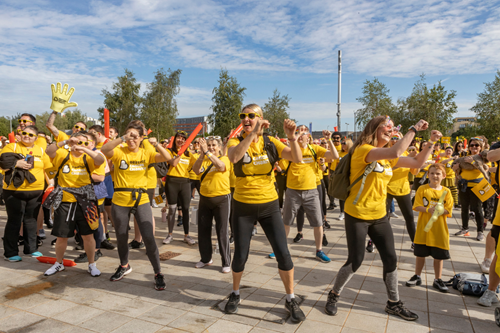 PICTURED: Some participants dressed up for the walk 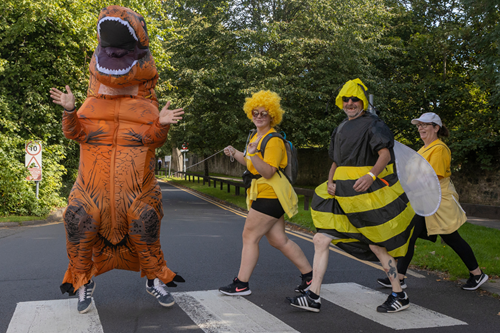 The weather was in everyone’s favour too as the sun shone throughout the day.

Melts Ice Cream Parlour also supported the event, by providing ice cream for walkers at the halfway point, with 50% of all sales going to Beatson Cancer Charity.

Maisie McCormick, community fundraising manager for Beatson Cancer Charity, said: “There’s no feeling quite like watching a sea of yellow take over the streets of Glasgow after two years of virtual events.

“Sunday’s walk was just incredible and reading everyone’s messages on the back of their t-shirts which explained why the walk was so important to them was so emotional.

“We’d just like to thank everyone who gave up their Sunday to come out and support our charity – the money raised will allow us to support more cancer patients and families in the future.”

Huge thanks to all our wonderful suppliers who helped us on the day by providing drinks and snacks for our supporters: Asda Bearsden, Asda Govan, Lidl Finnieston, Lomond Foods, Decathlon & Naked.

Thank you to everyone who participated in Off the Beatson Track 2022, we can't wait to see you all for OTBT's 10th anniversary next year!