"We felt lost without the Beatson so when we saw the competition I thought ‘that’s a way for us to keep connected'."

"We felt lost without the Beatson so when we saw the competition I thought ‘that’s a way for us to keep connected'."

Beatson Cancer Charity supporters have voted for a cancer patient’s dog to become our new Ambassadog.

Throughout National Dog Week from 19th-25th September 2022, our charity celebrated all our four-legged supporters. Hundreds of dogs took part in the Paw Walk to raise money.

The main prize of the Paw Walk is being chosen as our charity’s Ambassadog and becoming the face of next year’s Off the Beatson Track 10K walk.

Teddi takes over duties from Milo the bichon frise, from Irvine, who has served as the Ambassadog since September last year.

WATCH: Teddi the Ambassadog with owners Kevin and Hazel

Teddi’s owner Kevin from Grangemouth, Falkirk was diagnosed with stage three tonsil cancer and rang the bell signalling the end of his treatment in July this year.

Kevin is still waiting on PET scan results, which he will receive in the next few months and hopes they will bring some positive news.

Hazel explains why the Beatson has become a huge part of their lives.

Hazel said: “Kevin’s never been to the doctors in his life and then he was diagnosed.

“Originally, we went to Forth Valley and they said it was secondary cancer which was a bit of a blow because quite often if people are diagnosed with cancer, they say ‘let’s hope it’s not moved to the lymph nodes and let’s hope it’s not spread.

“I thought it was a wee cyst he had and they said ‘no it’s secondary cancer, it’s in the lymph nodes, we need to find the primary cancer’.

“They ran loads of different tests and it was stage three tonsil cancer and he was referred very quickly to the Beatson hospital to start six weeks of treatment. He had two cycles of chemotherapy and six weeks of radiotherapy every day apart from at weekends. They’re just marvellous.” 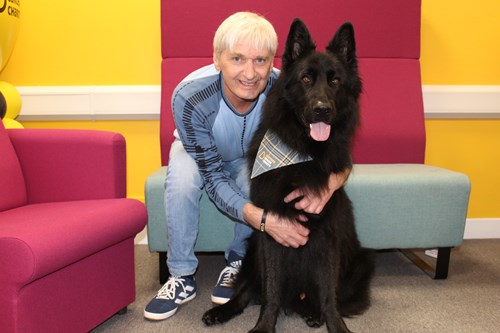 Teddi came into the couple’s life after their previous dog, Yogi, passed away.

They were certain their next dog had to be another black German Shepherd and brought Teddi home from a breeder in Cambridge.

Hazel said the competition seemed like a perfect fit to keep their connection with the hospital and our charity.

She said: “We felt lost without the Beatson so when we saw the competition I thought ‘that’s a way for us to keep connected with the Beatson and all the good work that they do and hopefully promote it and try and raise some funds for it’.

“Teddi likes dogs but he’s very much a people person. He just loves meeting people. He’s just so friendly and I think any event that we had to take him to that we had to represent you guys at he would be very sociable.”

Kevin says he owes his life to the staff at the Beatson.

Kevin said: “I’m getting there and I know it’s sad to say but I wish I didn’t have to come through here.

“They’ve saved my life because I don’t know how far I could have gone. Maybe ten years ago this wouldn’t have happened. Maybe I could have died from this, whereas things have moved on that quickly.

“The nurses and radiotherapy staff and everybody else were absolutely superb.

“The nurses in the wards when I was in for overnight stays for chemo couldn’t do enough for you. What you’ve got is the network round about it, it’s not just the hospital, you’ve got the charity here and everything else and everything that you do is unbelievable.”

Dog owners can support our charity by purchasing dog accessories made using Beatson Cancer Charity Tartan from our online shop.